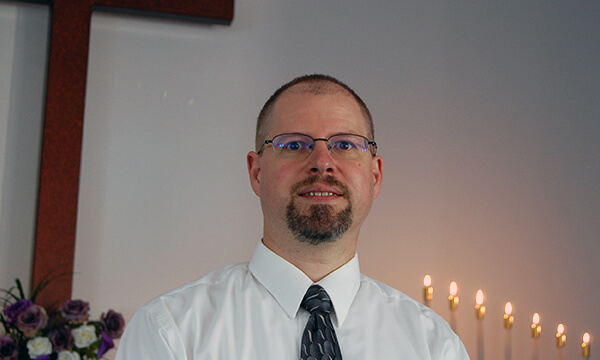 It was during this time that he met his future wife Melissa, who was born and raised in Thermopolis, Wyoming. Pastor Schurman began to find that he was far more interested in theology than engineering, and, in 1999, he attended Martin Luther College in New Ulm, Minnesota, to begin studies for the pastoral ministry.

Pastor and Melissa’s oldest son was born one month before they moved to begin his vicarage. He graduated from Wisconsin Lutheran Seminary in 2006 and was assigned to serve at Grace Evangelical Lutheran Church in Burke, South Dakota. Their second son was born in Burke. The Schurman family resided in Burke until their move to serve at Lord of Lords Evangelical Lutheran Church in Casper, Wyoming.

Pastor Schurman worked in a machine shop and various garages while studying, and he still enjoys working with his hands. His hobbies include restoring and repairing things, especially broken toys, as well as hunting and fishing.